The Power Station of Art is proud to present the major solo exhibition Cai Guo­Qiang: The Ninth Wave by the New York- based Chinese-born artist. This will be the first solo exhibition by a living artist at the institution, China’s first publicly funded contemporary art museum.

Cai Guo­Qiang: The Ninth Wave addresses one of the greatest challenges faced by mankind: Earth’s current environmental and ecological crisis. Evidenced by the high levels of smog in the air and the incident of 16,000 dead pigs floating down the Huangpu River last year, environmental issues in China—and the world at large have reached a critical level. Exploring the imminent challenge posed by the environment, the artist references a theme in traditional Chinese aesthetics and philosophy: humanity’s longing to return to a primordial landscape and spiritual homeland.

Many of the works in the exhibition were made especially for the exhibition at the Power Station of Art.A series of art interventions and artworks were realized in the public realm leading up to the opening, allowing the public to witness various stages of the creative process:

July 12 - The installation work The Ninth Wave set sail from the artist’s hometown of Quanzhou;

July 17 - The Ninth Wave sailed along the Huangpu River, past the Bund, and arrived at the pier by the Power Station of Art;

July 24 - The third work, the gunpowder drawing The Bund Without Us was made.

PSA’s building; the former Nanshi Power Station will serve as a powerful backdrop for an exhibition that focuses on our interaction with nature. Occupying the galleries on the first and second floors of the museum, Cai Guo­Qiang: The Ninth Wave will include eleven major works, representing the diversity of media the artist is well known for.

In the Great Hall on the ground floor, visitors are greeted by the installation The Ninth Wave, comprising of 99 fabricated animals on a fishing boat from the artist’s hometown of Quanzhou. The boat navigated along the Bund on the Huangpu River on July 17 as an art intervention, before ultimately'landing'at the museum. On the boat, tigers, pandas, camels and other animals appear weather-beaten with their heads bowed, as though seasick from the currents of our times. Although the work may bring to mind the Biblical tale “Noah’s Ark,” the animals in this work have yet to be saved from danger and seem to be drawing their last breaths. The work was inspired by Russian painter Ivan Aivazovsky’s 1850 eponymous painting, which famously depicted survivors from a ship wreck clinging to a mast as in the last throes of survival, expressing human’s helplessness in the face of nature’s unforgiving forces.

Another new work Silent Ink—a literally ground breaking, site-specific installation—features a 250 square meter lake excavated out of the gallery floor that has been filled with 20,000 liters of black ink; the piece creates asereneyethaunting effect. Unlike other more figurative or narrative works in the exhibition, the vast stretch of black and the pervasive scent of ink in the work deliver an abstract and compelling multisensory experience.

On the second floor, The Bund Without Us, a colossal gunpowder drawing on paper measuring 27m long by 4m wide, re‐imagines the cityscape of Shanghai without human presence and overtaken by nature.The artist borrows animal and plant motifs from Shanghai School paintings of late 19th century China inthe work’s composition. By referencing these elements, Cai conjures the spirit of literati paintings, alluding to a time when people lived humbly and in harmony with nature. A suite of four gun powder drawings on porcelain, each measuring 3m long by 2.4 m wide, Spring, Summer, Fall, Winter, follows the cycle of the four seasons, evoking and renewing the spirit and tradition of Chinese liter at ink painting. Delicately balancing the violent, instant impact of the gunpowder explosion and the frailty of the porcelain, Cai Guo-Qiang manages to capture the vivid tones of the four seasons with unusual nuance and sensitivity.

In the former power plant’s chimney, three life-like baby dolls sit on swings that sway back and forth in Air of Heaven.

Several of Cai’s seminal works will also be exhibited for the first time in Shanghai. Initially presented in Berlin in 2006 and shown worldwide, Head On features 99 wolves charging to ward and crashing into an invisible wall, are flection on the repercussions of collective behavior and the endless cycles of destructive folly throughout history. In Birds and Flowers of Brazil, the lyrical imagery of exotic flora and fauna pays homage to Earth’s biodiversity and the genre of the same name in Classical Chinese painting. Extending vertically, the 18m high by 4m wide gunpowder drawing on paper created in Brasilia in 2013 mimics the visual experience of unrolling a classical Chinese hanging scroll painting.

The exhibition is complemented with contextual and educational components, such as a video retrospective of Cai Guo-Qiang’s explosion events; Timeline, a chronology incorporating artworks, photographs and ephemera that provides biographical context on his artistic development and achievements; sketches related to the making of the exhibition; and Boy Cai in Shanghai, an educational gallery with interactive activities for children and their families.

CaiGuo-Qiang: The Ninth Wave examines concepts and forms recurrent in recent works by the artist, from his explorations of the literati painting tradition, to themes relating to the environment and ecology. Cai's gunpowder drawings and installations—which often include animals and boats—have become increasingly narrative, integrating allegorical imagery.

It is also important to note the artist’s evolving methodology as seen particularly in his large-scale installation works: for instance, some start as mobile art interventions with local community participation. Throughout his career, Cai has shown an artistic intent to embrace open-ended outcomes and foster cultural exchange. This interest is expressed in his collaborations with local volunteers from different countries to materialize gunpowder drawings on paper and porcelain, and in his willingness to open a dialogue by inviting the public to witness the creative process.

The exhibition therefore sums up Cai Guo-Qiang’s art-making approach, as he shuttles back and forth between different cultures, interacting and collaborating with different local communities. As the artist creates works in multiple forms and method logies, he continues to explore artistic concepts and pushes boundaries between different formats.

GongYan, Director of the Power Station of Art remarks, “In combination with the Power Station of Art’s unique historical background, Cai Guo-Qiang addresses increasingly urgent environmental and ecological issues through rich and varied artistic explorations. The deep humanistic concerns expressed in Cai Guo-Qiang: The Ninth Wave have great significance in contemporary society. Together, we hope the response to environmental issues and the conviction to overcome them presented in the exhibition can deliver a strong, resounding message to China and the rest of the world.”

Cai Guo-Qiang (b. 1957, Quanzhou, Fujian Province, China) currently works and lives in New York. He was trained in stage design at the Shanghai Theater Academy, and his work has since crossed multiple mediums within art, including drawing, installation, video and performance. While living in Japan from 1986 to 1995, he explored the properties of gunpowder in his drawings, an inquiry that eventually led to the development of his signature explosion events. Cai was awarded the Golden Lion at the 48th Venice Biennale in 1999, and the Praemium Imperiale in 2012. Additionally, he was also among the five artists honored with the first U.S. Department of State Medal of Arts award.

Among his many solo exhibitions and projects include Cai Guo-Qiang on the Roof: Transparent Monument at The Metropolitan Museum of Art, New York in 2006, and his retrospective I Want to Believe, which opened at the Solomon R. Guggenheim Museum, New York in 2008. The exhibition traveled to the National Art Museum of China in Beijing later that year, and then to the Guggenheim Bilbao in 2009. In 2011, his work was exhibited in Cai Guo-Qiang: Hanging Out in the Museum at the Taipei Fine Arts Museum, and his most recent exhibition, Falling Back to Earth opened in November 2013 at the Queensland Art Gallery | Gallery of Modern Art in Australia.

Shanghai was Cai Guo-Qiang’s first “port of call” after he left his hometown of Quanzhou. Since studying in Shanghai, he has since returned a number of times to his “mother port.” In 2001, he designed the Asia-Pacific Economic Cooperation (APEC) Cityscape in Shanghai, which then established a foundation for his continued artistic activities in China, the most notable of which is his participation in the 2008 Beijing Summer Olympics. In 2002, Cai held his first solo exhibition in China at the former Shanghai Art Museum.

Coinciding with the Shanghai Expo in 2010, the Rock bund Art Museum opened with the inaugural exhibition, Cai Guo-Qiang: Peasant DaVincis. The exhibition toured to Brasilia, São Paulo and Rio de Janeiro in 2013, and was the most visited exhibition by a living artist worldwide that year with over one million visitors. In the same year, Cai also created the gunpowder drawing Homeland in Shanghai for a charity auction. 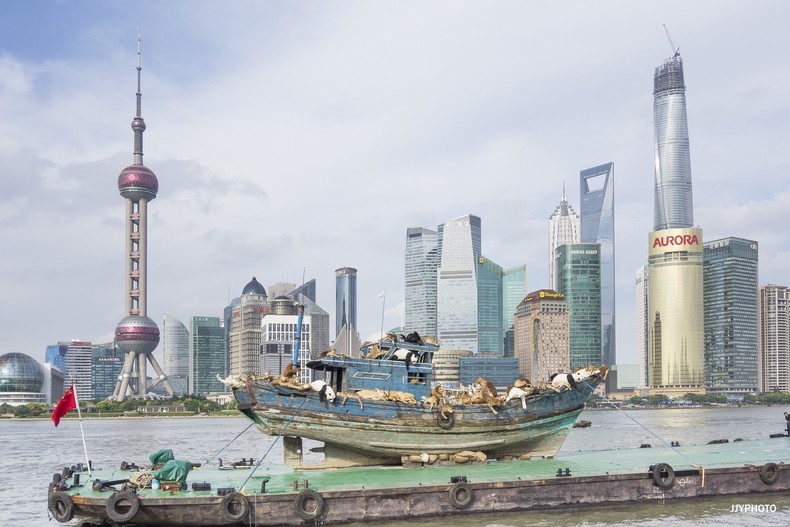 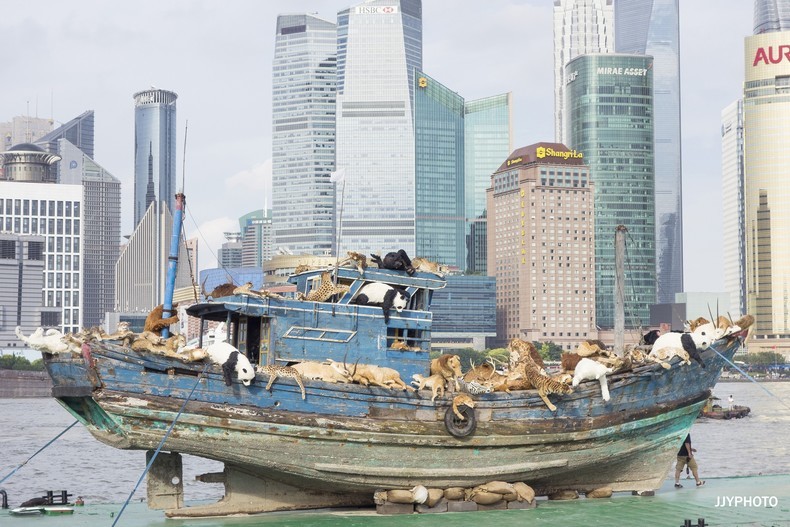 The bund without us Birds and Flowers of Brazil 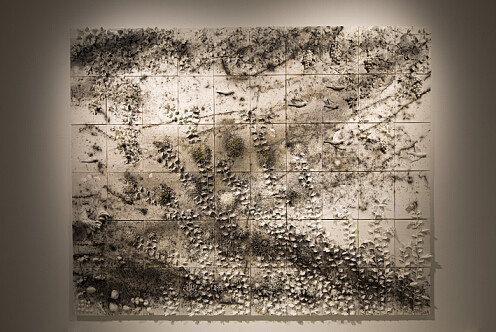 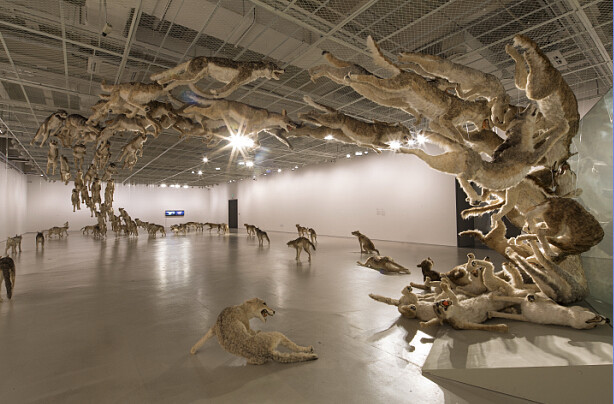 crashing into an invisible wall

Children's art event｜The Bund Without Us