From November 7th, 2019 to February 16th, 2020, the Power Station of Art will host the exhibition “Passing Through Architecture: The 10 Years of Gordon Matta-Clark.” Gordon Matta-Clark (1943-1978) represents a unique case in 20th-century art history. He treated buildings as his artistic medium and is best known for his “cuttings” and reflections on “anarchitecture.” Starting in New York’s downtown SoHo district in the early 1970s, he cut into buildings as if drawing freely in space, producing some of the most celebrated artworks that continue to inspire generations of artists and architects today. As the first large-scale exhibition of Matta-Clark's work in China, “Passing Through Architecture: The 10 Years of Gordon Matta-Clark” will trace the remarkable thinking and avant-garde works of this interdisciplinary artist from 1968 to 1978 with more than 400 drawings, photo-works, films and archival documents.

In 1968, Matta-Clark graduated from Cornell University’s Department of Architecture and returned to his birthplace of New York City, which was undergoing a post-war “urban renewal plan” and an overall economic transformation. Many old buildings faced demolition, slums were razed, ethnic minorities expelled, and a large number of people were left homeless, while the white middle class moved away from the innercity. The urban decay prompted Matta-Clark to devote himself to a series of practices that criticized modernist urban planning and created temporary communities and autonomous spaces, as well as housing and living programs for the poor.

Matta-Clark's renowned "cuttings" began in 1971. He physically sliced open and dissected buildings, defamiliarizing them into giant inhabitable sculptures with a haunting beauty that he captured in films and photo-works. He began by cutting small rectangular holes into the floors and walls of abandoned buildings in the Bronx, New York. The cuts grew steadily bigger in size and complexity. By late 1973 he cut through a whole building for the first time to produce the A W-HOLE HOUSE. In the following year, Matta-Clark completed his most famous work SPLITTING by cutting an abandoned home in New Jersey in half and leaning one half back a little. A few months later, in his work BINGO/NINTHS, he cut the façade of a house in Niagara Falls, New York, into nine rectanglesso that it resembled a bingo game card, and then gradually removed each one in turn until only one remained. In 1975, he illegally trespassed into an old warehouse at Pier 52 on the Hudson River in New York where he made a series of cuts, including a huge half-moon-shaped hole in the end wall. Sunlight reflecting on the water entered the building through the hole, weaving the poetic narrative of DAY’S END, which would be regarded as one of his most spectacular and controversial works. That same year, Matta-Clark was invited by the Paris Biennale to cut two neighboring 17th century buildings that were facing demolition to make way for the construction of the Pompidou Centre. He connected and cut through the two buildings by means of the CONICAL INTERSECT, a cone-shaped cut up an angle that allowed passers by to glimpse up and through the normally hidden complex structure behind the façade. His final building cut, CIRCUS: THE CARRIBEAN ORANGE, completed in Chicago when the artist was suffering with cancer shortly before his death, was perhaps the most dramatic of all. Matta-Clark described cutting buildings as a kind of theatrical performance that attempted to reveal the fragility and instability of the buildings we inhabit, as well as the complexities and hidden life they embody. He tried to show that buildings are all already filled with holes and secret lives long before he intervened.

In the same spirit of Gordon Matta-Clark's cuts, this exhibition will follow an existing breach in the Power Station of Art: an invisible diagonal line that passes through the entire building. The exhibition does not prescribe a standardized visiting path, encouraging the audience to explore the artist's creations along this chronological line or view his colorful life from any angle. Notably, this exhibition will display for the first time around 180 drawings and sketches that Matta-Clark never showed during his lifetime, his private explorations. His delicate drawings of trees, cacti, arrows, and energy configurations were an in-depth study of the organic world and the movements of energy that morphed into remarkable sketchs of architectural interventions that the artist imagined but never carried out. This hidden world reveals a remarkable counterpart to the groundbreaking work that has made Matta-Clark one of the most admired artists of the 20th-century.

The exhibition was curated by the renowned architecture historian Mark Wigley and is a continuation of PSA's themed program “Architecture & City” Exhibitions and Researches. It aims to examine Matta-Clark's relentless exploration of topics like architecture, space,biology and ecology; to question the nature of architecture, the natural environment, and human life beyond the scope of architecture 50 years after the artist’s return to New York, and to rethink the multi-faceted legacy left by modernist urban planning ideas.

Passing Through Architecture: The 10Years of Gordon Matta-Clark

Gordon Matta-Clark (1943-1978), born in New York to Chilean surrealist artist Roberto Matta and American artist Anne Clark, is recognized as a central figure of the New York art scene in the 1970s. He studied architecture at Cornell University from 1962 to 1968, including a year in Paris to study French literature. During his time at Cornell, he met land artist Robert Smithson, who became a great inspiration tohim. After graduating, Matta-Clark returned to New York and pioneered a radical approach of directly engaging with the urban environment and its internal communities for artistic creation.Matta-Clark critically examined the structure of the built environment, physically cutting through buildings that faced demolition, and created a series of stunning works, including large-scale architectural interventions. His performances and experiments transcended the fields of performance, concept, process, and land art, making him one of the most innovative and influential artists of his generation. Matta-Clark's work is widely exhibited around the world and is part of the permanent collection of many public institutions. The Canadian Center for Architecture in Montreal maintains the “Gordon Matta-Clark collection,” which includes the artist's personal correspondences, notebooks, paintings, photography, slides, videos, and other documents of his life and work.

Mark Wigley is a Professor of Architecture and Dean Emeritus at Columbia University’s Graduate School of Architecture, Planning and Preservation. He is a historian and theorist who explores the intersection of architecture, art, philosophy, culture, and technology. His books include Derrida’s Haunt: The Architecture of Deconstruction; White Walls, Designer Dresses: The Fashioning of Modern Architecture; Constant's New Babylon: The Hyper-Architecture of Desire; Buckminster Fuller Inc.: Architecture in the Age of Radio; and Are We Human -Notes on an Archaeology of Design (written with Beatriz Colomina when they co-curated the 3rd Istanbul Design Biennial). He has curated exhibitions at the Museum of Modern Art, The Drawing Center, Columbia University, the Witte de With in Rotterdam, and the Canadian Center for Architecture in Montreal. His most recent exhibition, “The Human Insect: Antenna Architectures 1887-2017,” was held at Het NieuweInstituut in 2018. His most recent book is Cutting Matta-Clark: The Anarchitecture Investigation (Zurich: Lars Müller, 2018; Chinese version to be published in January 2020). He was born in New Zealand, where he trained as an architect and then as a scholar. He is currently based in New York.

In 2013, PSA initiated its themed program: “Architecture & City” Exhibitions and Researches, launching themed exhibitions, seminars, and supporting publishing plans every year. With architecture as a comprehensive social device, PSA is hoping to tell stories between cities and their inhabitants, as well as explore the intricate relations between the individual, space, and mechanisms of power. Until now, the museum has held related exhibitions including “Kazuo Shinohara” (2014), “Piece by Piece: Renzo Piano Building Workshop” (2015), “Mobile Architecture: Yona Friedman” (2015), “New British Inventors: Inside Heatherwick Studio” (2015), “Sou Fujimoto: Futures of the Future” (2015), “Anti-Climax Poetry: Sakamoto's Architecture” (2015), “Bernard Tschumi – Architecture: Concept & Notation” (2016), “Ordinary Metropolis – Shanghai: A Model of Urbanism” (2016), “Toyo Ito: On the Stream” (2017), “Balkrishna Doshi: Celebrating Habitat – The Real, the Virtual & the Imaginary” (2017),“Shigeru Ban–Works and Humanitarian Activities” (2017),“Superstudio 50” (2017), “The Rise of Modernity: The First Generation of Chinese Architects from the University of Pennsylvania” (2018),“Hélène Binet: Dialoghi, Works from 1988 to 2018” (2019), and “Junya Ishigami: Freeing Architecture” (2019). 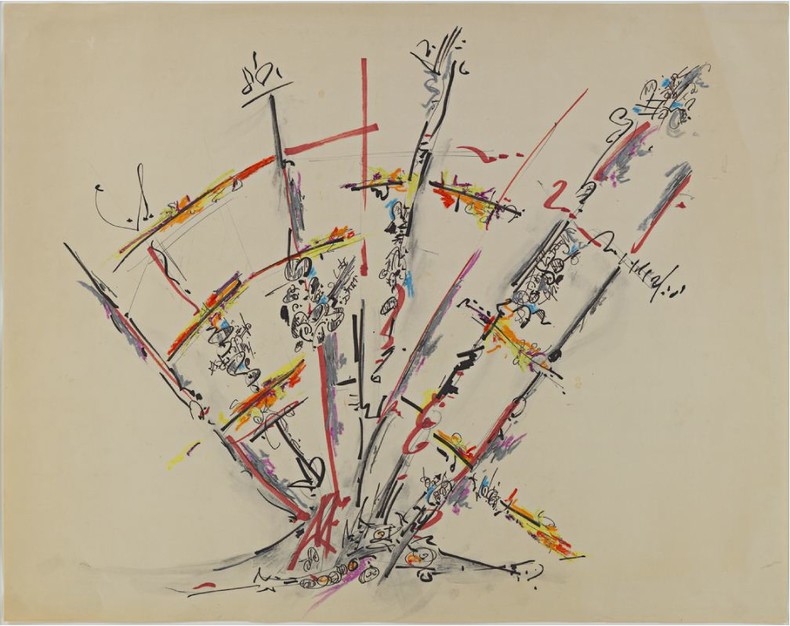 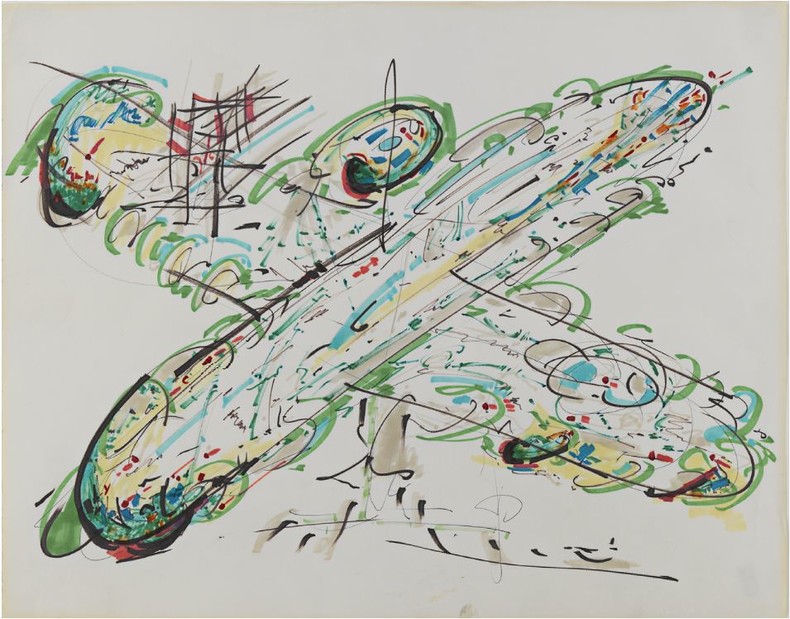 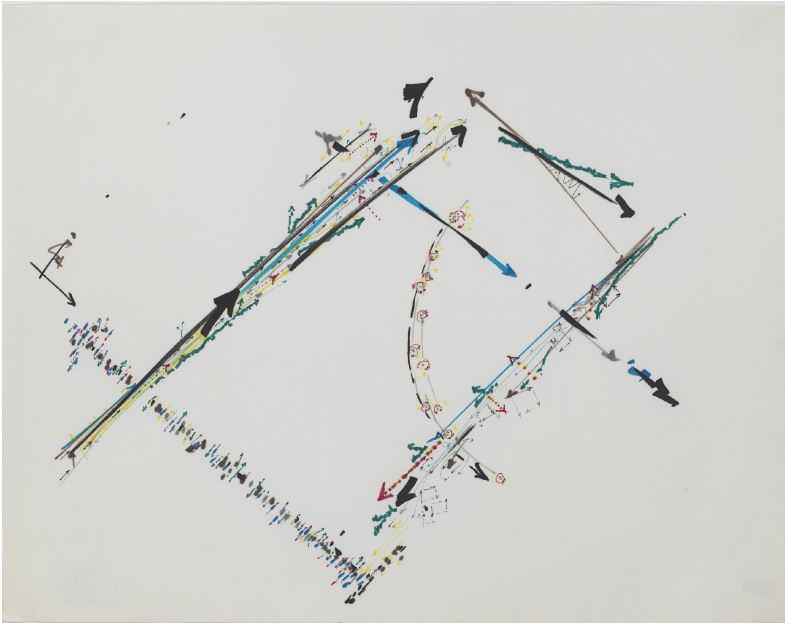 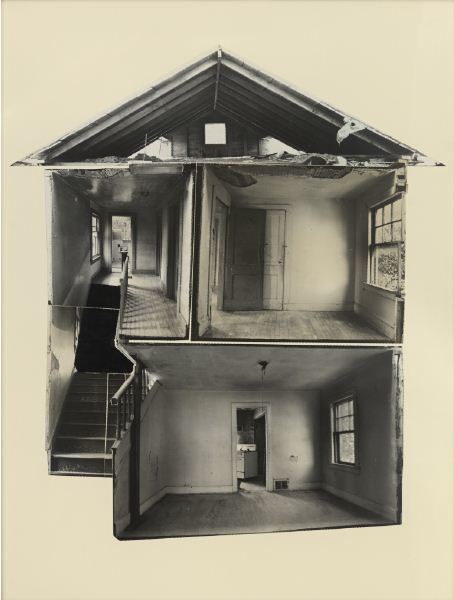 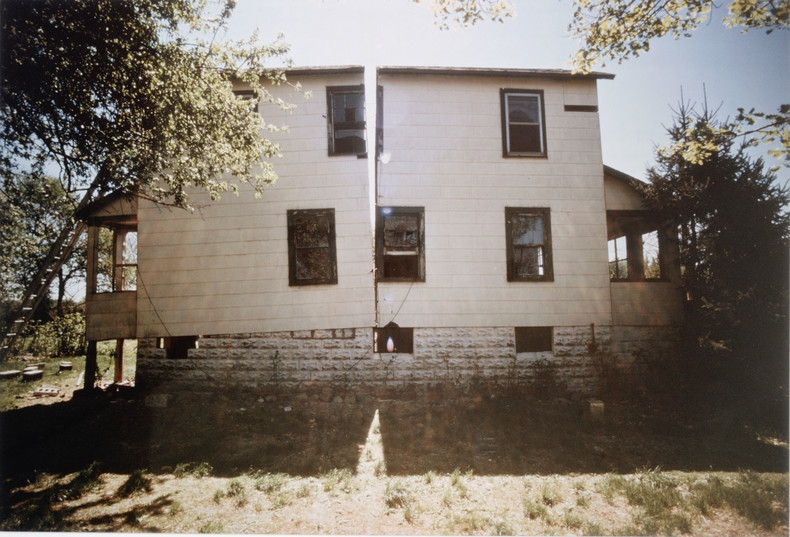 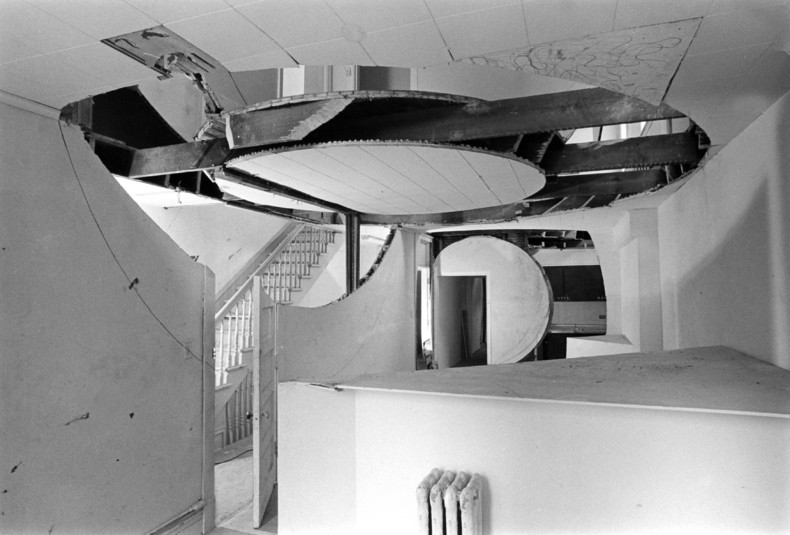 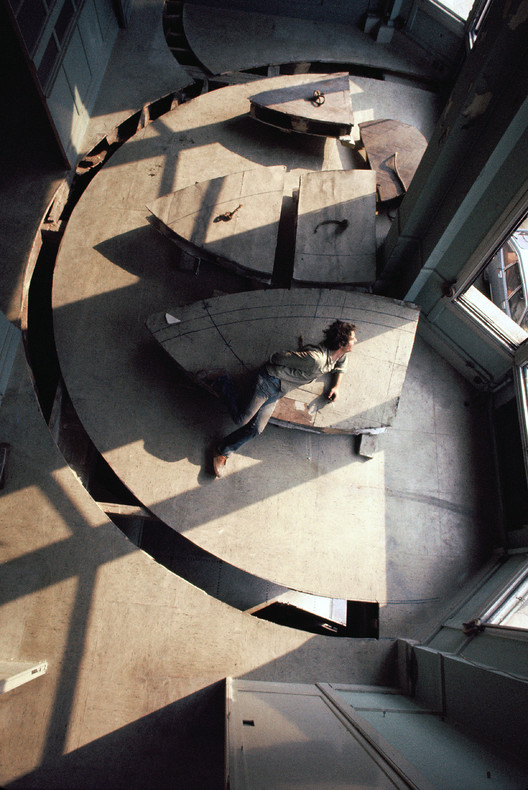 Sketch of project to cut through 6 houses in Houston, in letter from Gordon Matta-Clark to Marilyn Lubetkin, May 15, 1975. Photo ©Matta-Clark Collection. Canadian Centre for Architecture (CCA), Montreal, PHCON 2002:0016:003:075. 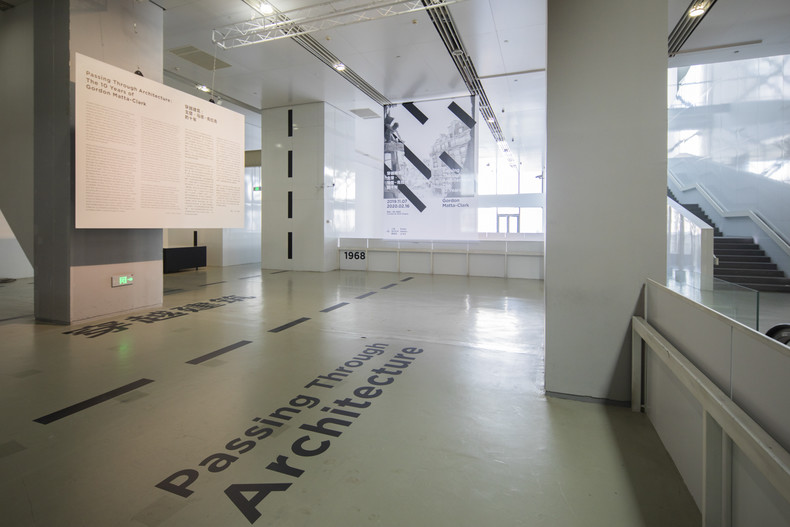 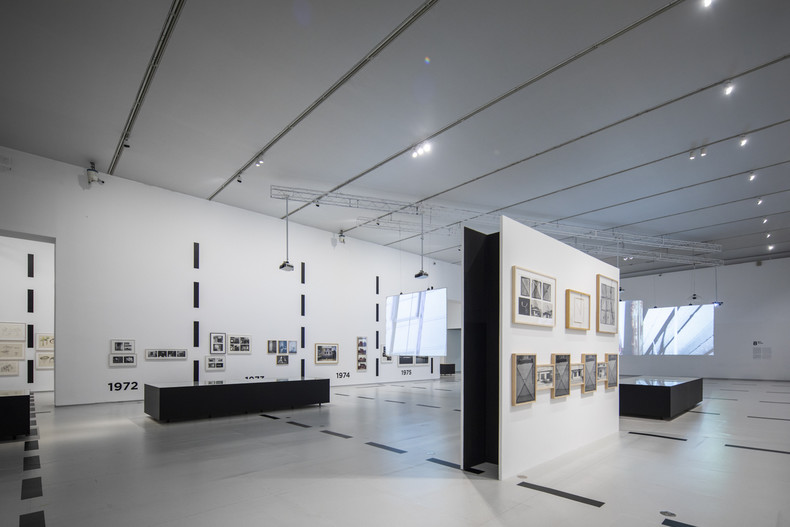 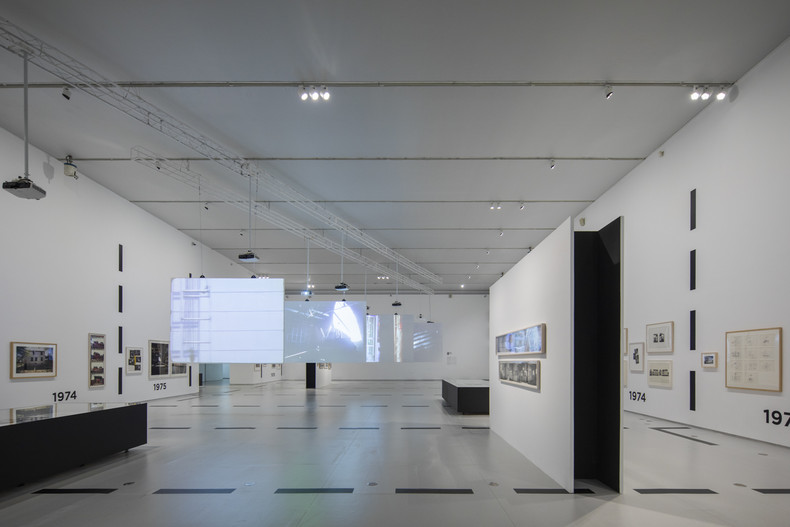 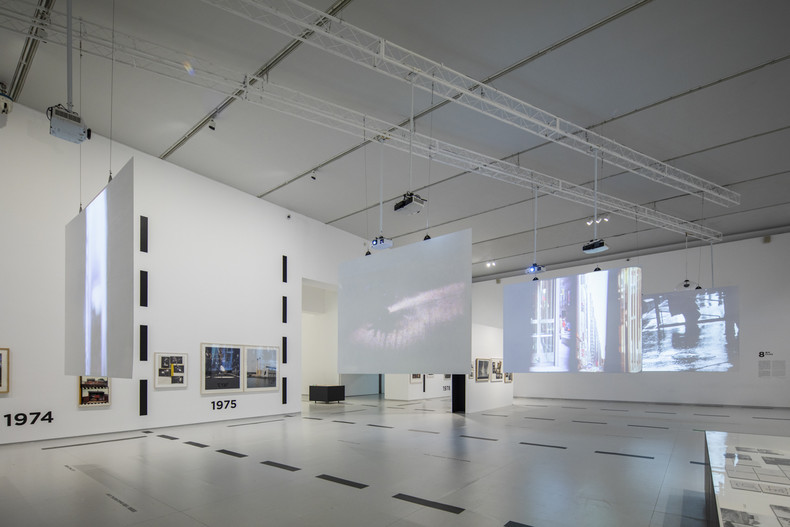 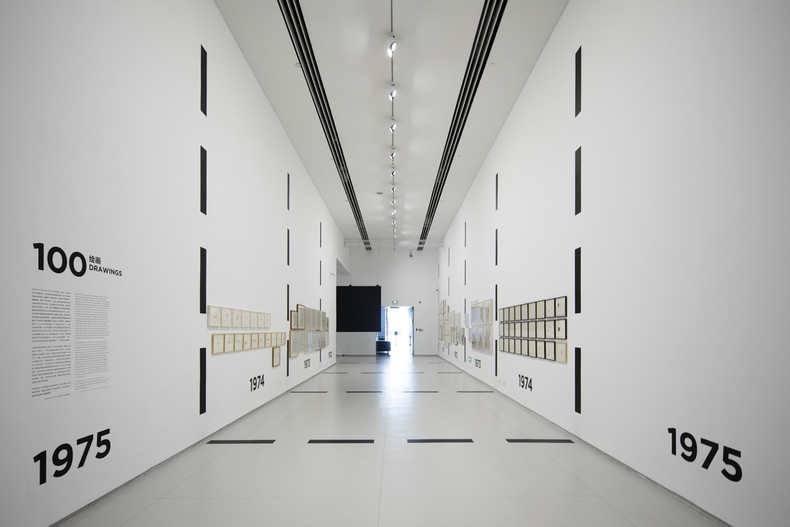 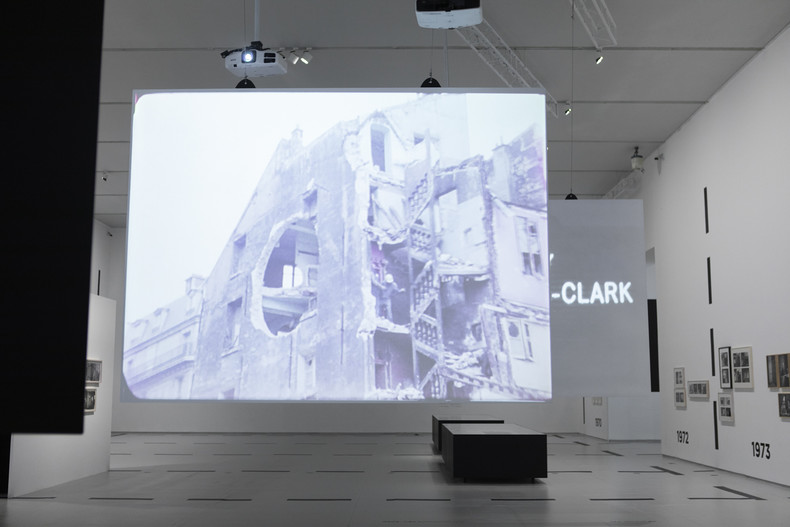 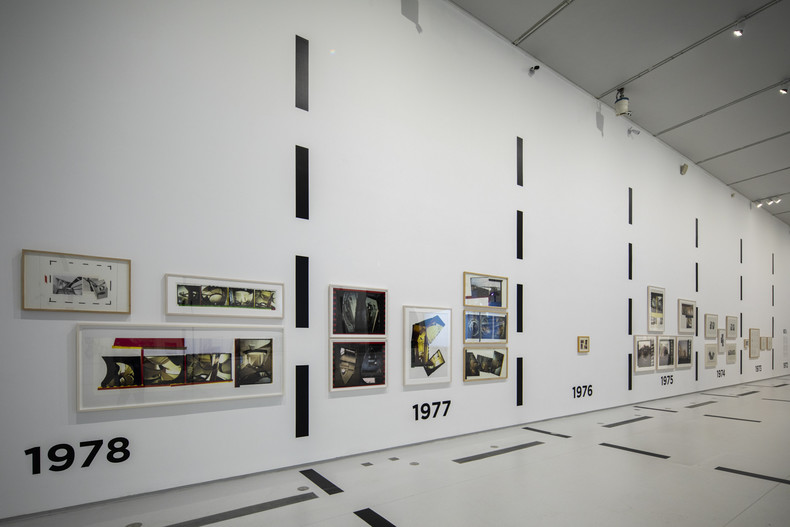 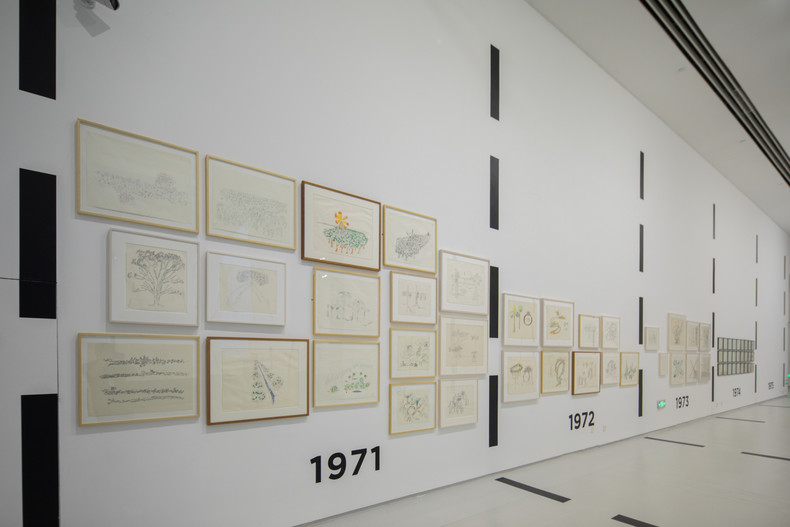 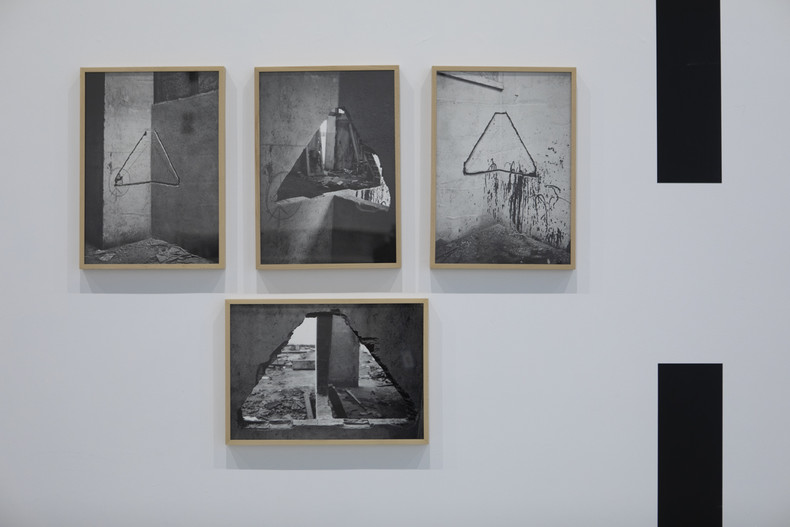 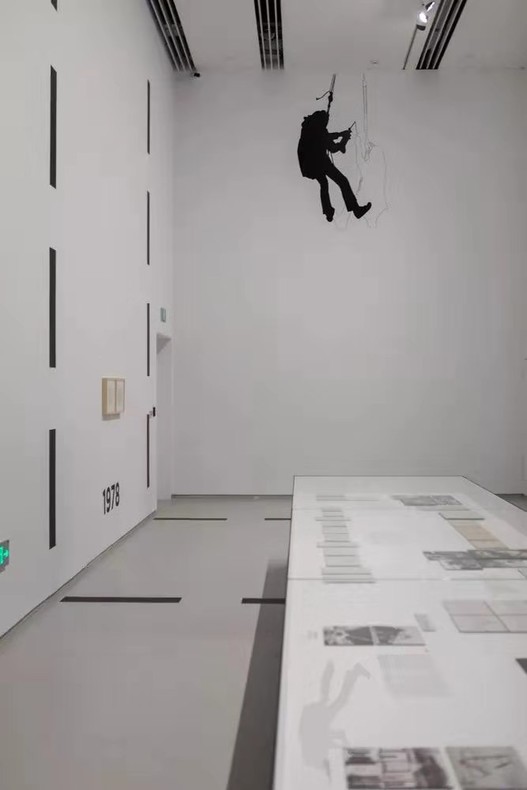